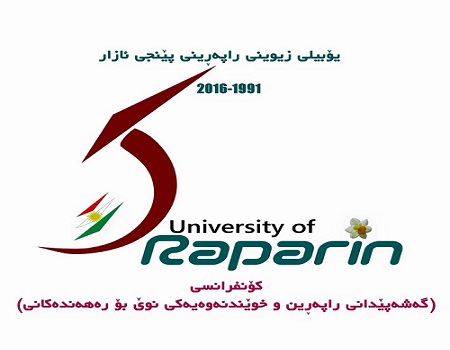 It is scheduled that on 6-7/3/2016 University of Raparinin commemoration of silver jubilee of the uprising holds the conference of “Development of Raparin and Reappraisal of the Uprising Dimensions” at the hall of media and intellectual activities in the new campus of the university in Ranya city.

The conference is about the greatest event in Kurdish modern history and it’s political, ideological, cultural and administrative consequences. Nineteen (19) Different scientific researches that have been done by academic researchers are going to be presented during the conference as well as other artistic and intellectual activities are presented.
Since (2015) Raparin University has been preparing through a scientific committee to organize the conference. The aim of the conference is to reappraise subjectively the political, ideological, cultural and administrative consequences of the uprising. The conference lasts for two days in which 19 scientific Researches are presented in five panels.
It is worth to be mentioned that it is the first scientific conference in Kurdistan about (5th march, 1991 Uprising) that has been academically organized. The first spark of 5th march, 1991 Uprising started in Ranya city. Therefore, the city is called (the gate of uprising), until nawroz (21st of March) of the same year all of the Kurdish cities rose against the dictator regime of ba’th and were completely freed once and for all.  The uprising led to the foundation of Kurdistan parliament, formation of Kurdistan regional government and self-governing in the southern Kurdistan in modern history. The complete agenda of “development of the uprising and reappraisal of its dimensions” in PDF format