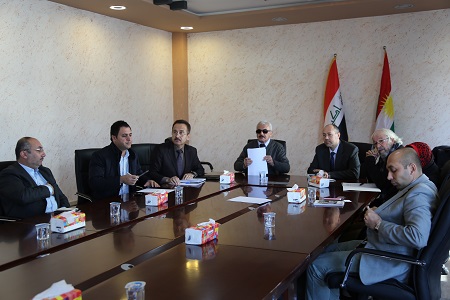 On Wednesday 13 / 1 /2016, Erasmus Mundus ‘Marhaba’ Delegation visited Raparin University. The delegation consisted of (Mr. Enrique Lopez Veloso) the project coordinator and (Prof. Anselmo,Seoane Pampin) the project external evaluator. The visit comes as a part of visiting the participating universities of the project.

The delegation was warmly welcomed by his Excellency University president (Prof.Muhamad Ali), the university council and the directorate of relations.  The delegation held a meeting with the university council in which the project was described as a golden opportunity for the students and staff members of the developing universities among them raparin university as a member of the project.They also discussed future steps of the project in cause of providing further opportunity for the staff and students of the participating universities and promoting the academic relation between them through providing more studying chances and academic staff exchange among them.

Later, the delegation visited the faculties, schools and departments of Raparin University where they were familiarized with the university progression that has been achieved as well as the problems and shortages of the university.

Erasmus mundus Marhaba is a project that is supervised by the University of Santiago in Spain and funded by the European Union. The goal of the project is to strengthen and improve the ties between Europe and Iran, Iraq and Yemen in the field of higher education. The Academic staff and students can be exchanged through this program among the participating universities.

The directorate of Relations, Media and Publications has undertaken the responsibility of supervising the project in Raparin University and has organized many seminars and workshops about the importance of the project for the academic staff and students of the university.