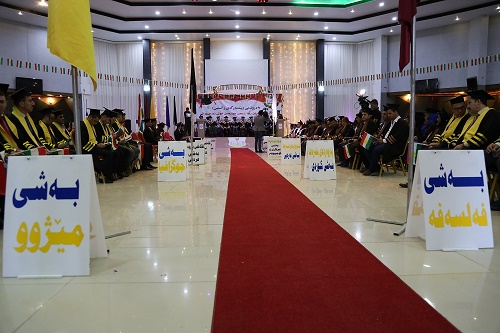 The University of Raparin grants Bachelor Degree to (416) Graduates

In the presence of the representative of the KRG Minister of Higher Education and Scientific Research, and dozens of officials, specialists and academics, and under the motto of (We are the Peshmerga of Science), the graduation ceremony of the fourth round of the University of Rapareen students was hold on October 24, 2015 in the town of Rania.

In his speech, Dr. Yusuf Goran congratulated the graduates and thanked the professors and parents for taking care of the graduates. He also indicated the progress and the development which the University of Raparin is witnessing since the great uprising of the Kurdish people in 1991.

Dr. Karim Abdul shed light on the ministry’s current higher education policy, saying: “The ministry’s current priority is raising the quality of education in the region’s public and private universities. Accordingly, the ministry made steps for carrying out the project of the National Ranking of Kurdistan Region’s Universities, as well as promoting the process of quality assurance and scientific research.”

During the ceremony the certificate of Bachelor was granted to (416) graduates from Raparin University. Later, Dr. Karim Abdul presented the ministry’s gift to the top 10 students, hoping that all graduates to participate in Kurdistan’s rehabilitation through their skills.