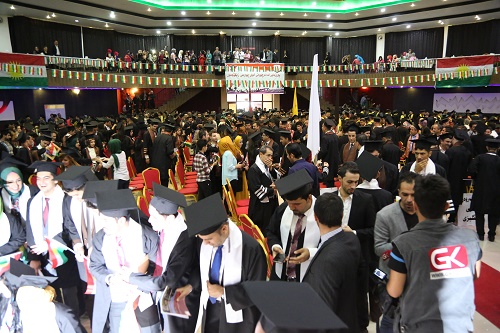 On Tuesday (20/10/2015) under the slogan of (we are Peshmarga’s of science) University of Raparin celebrated its fourth graduation ceremony for the graduates of (2014-2015) with the presence of (prof. Karim Abdul) representative of Minister of Higher Education and Scientific Research, the Mayor of Rania, the head of Raparin Administration and officials of governmental and non-governmental institutions from the region.

The ceremony started with gathering of the instructors and the board of university together with the students in Zin Hall in Rania City. The distinguished guests stood a moment of silence for the martyrs of freedom of Kurdistan. Then some verses of the holy Quran were recited.
The speech of the head of the higher committee of the graduation ceremony was given by DR. Herish Rasul vice president for student’s affairs. In spite of welcoming the guests very warmly his Excellency Dr. Herish pointed that it is the product of the tiredness and struggle of the martyrs and our brave Peshmarga’s that Kurdistan Region is free today and stable. The loyal instructors, administrative staff of the university, faculty, schools, and the departments have gained an important scientific achievement with their efforts. He hoped that the university graduates would participate actively within their specialization fields in building and renovating Kurdistan Region in the future.
Then, the president of University of Raparin; Prof. DR. Mohammed .Ali. Abdullah, in his speech, he welcomed very warmly all the distinguished guests of the ceremony and congratulated the graduates for their success.
Adding to, he highlighted the history of the struggle of Kurdistan Region and presented the importance of an academic institution like University of Raparin that has provided the district with a scientific environment for education, learning and training. The university has provided a fair studying chance to everyone in cause of participating in human capacity development in different disciplines. This academic foundation has given hope to build a bright future for the Raparin Administration.
Prof. Dr. Abdullah emphasized on the problems that have become obstacles in front of the development of the universities especially the problem of not providing job opportunities for the graduates of institutions and universities due to some effective factors that have disappointed the graduates and have raised the rate of unemployment, he also said that the higher education sector and this establishment needs constant reforms. And the universities have to be granted independently in terms of administration, finance and knowledge so that they can show their initiative and outstanding role in the changing and alleviation of the program qualities and get them adapted to the marketing needs, and try to fortify strong connection with both private and public sector of the Kurdistan Region.
Respectively, Prof. DR. kareem Abdul congratulated the graduates and their families and thanked the instructors for their vigilance to help students and a new generation of college graduates grow academically and familiarize them with updated science and knowledge. In another part of his speech, he shed a light on the history of Higher Education in the Kurdistan Region and its development after the nineties, he announced: that University of Raparin has experienced a rapid development since its establishment and has many faculties, departments and expertise that have their own value for the Kurdistan region.
Also about the current policy of the Ministry of Higher Education and Scientific Research, Prof. Dr. Abdul said that now the higher education pays significance to the quality of education in the universities, and in this very realm the Ministry of Higher Education and Scientific Research has taken very serious steps to implement the national ranking for the universities of Kurdistan Region, and for that reason higher education pays importance to the process of quality assurance and scientific research.
At the end of his speech he directed the ministry’s congratulations to the president of University of Raparin, who has tried to do the best of his ability and with a lot of passion to help provide all the necessary and scientific needs as well as providing a suitable atmosphere for this new group of graduates. He also praised the families of the graduates for their assistance in supporting their sons and daughters, and at the same time he also honored the students who have successfully accomplished and achieved this great achievement and hoped that they show their role in the development and reviving of the Kurdistan region with their expertise.
At the end of the ceremony, Bachelor’s certificate was awarded to 416 graduates of the year (2014-2015) the majority of whom where graduates of ten departments in three faculties and one school of University of Raparin. And the prize of the ministry of higher education was awarded to the top-ten students of University of Raparin. by Prof. DR. Abdullah