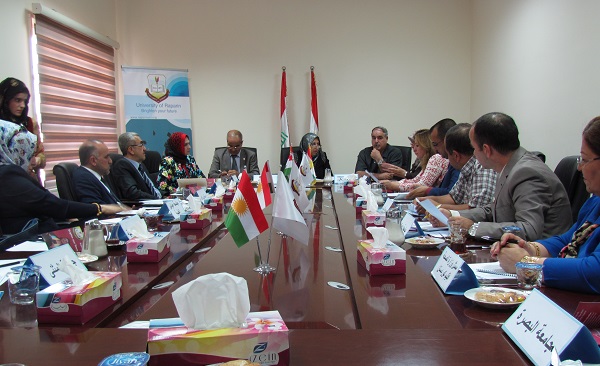 On Wednesday, August 5, 2015 the Iraqi nursing colleges meeting was held at University of Raparin’s nursing school, this is a sessional meeting arranged for the dean of all the Iraqi Nursing colleges.

With the arrival of the delegated guests including, representative of KRG Ministry of Health, head of council of trustees of Iraqi nursing colleges, Dean of nursing colleges in Iraq, the delegation was warmly welcomed by Asst. prof. Dr. Sana Hassan, head of nursing school at the University of Raparin, later on the meeting started.

At the beginning of the meeting, Dr. Sabah Rasheed, vice president for scientific and higher education affairs, welcomed the guests and said “we hope that these meetings have an effective role regarding scientific developments within the nursing colleges and strengthening the linkages among them in order to meet the highest  scientific standards in the colleges” .