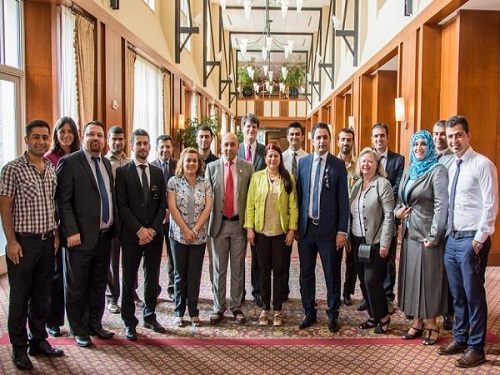 A group of Academics from Kurdistan, visiting Virginia Tech for 3 weeks this month, has watched from afar as their homeland faces attack by ISIS militants.
The group is here studying higher education practices and principles in order to bring them back to their home universities. It’s funded by the U.S. State Department and the Iraqi Embassy. When they left home, Kurdistan was in peace.

"We are not as safe as before we came here.  When we depart Kurdistan it was absolutely safe. Still we are safe but we are under the threat of these new terrorist groups," said Barzan Karim, from the University of Halabja.
Recently, Kurdish Leader Masoud Barzani had a an Op Ed piece in the Washington post comparing attacks by ISIS militants to the rise of Nazism in Germany and saying quote  the” world must act to prevent genocide and the slaughter of innocents.
"President Obama was right. We don’t want the American troops to fight our battle. We want them to help us to build our army to defend ourselves," said Ghayda AlFaisal from the University of Zahko near the Turkish border.
The group of Kurdish academics visiting Virginia Tech and the region will return home in ten days as planned after completing final projects on university administration and teaching.
"We want to be with our family with our Kurdish people. We will definitely go back to Kurdistan we love Kurdistan," said Barzan Karim.
Virginia Tech has offered to extend their stay if conditions change.  At this point, flights are still going in to northern Iraq.