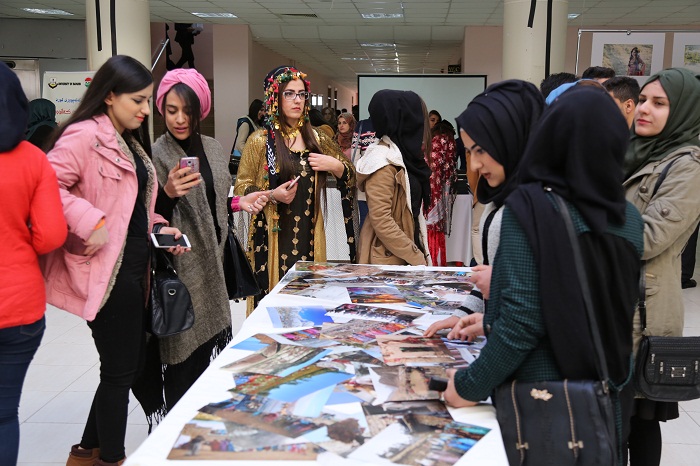 Cultural festival at University of Raparin

On Tuseday, December 12, 2017, university of Raparin cooperated with Kurdish Cultural Institute in holding a Cultural festival and seminar.
The festival started at 10 AM with opening a book exhibition for “Voice and Color” publications, in addition of showing classical Kurdish songs and music. The festival started with one-minute standing respecting the spirit of martyrs who sacrificed themselves for Kurdistan, the Kurdish national anthem was also played.
After that Assit. Prof. Dr.Mofaq Khalid Ibrahim the president of University of Raparin gave his speech an welcomed Mr. Mazhari Xalqi the great figure in Kurdish Literature and other guests of the institute including the festival attendees, he said that each nation has its own cultural identities that differs it from the other nations, despite of having common intercultural features, he also added that each nation has its specific cultural identity which is the nation’s right to protect and preserve it to develop it and show it to the whole world, Dr. Mofaq also said that working on this cultural issues and preserving the cultural identity for Kurdish people is very difficult compared to other nations, because this nation has faced wars colonialism throughout the history, he said “ we hope that we could serve the Kurdish culture through these kinds of activities.
After that Mr. Khalil Abdullah general director of ministry of youth and culture’s bureau gave his speech in which he gave his appreciation to the Kurdish Cultural institute and the University of Raparin for holding such event, he said that the cultural issues are very vital and important concerning that they represent the identity and the power of the nation which is very important to teach the individuals on this, Mr. Khalil also said that the ministry of Youth and Culture cannot do this alone but there should be a cooperative work between the cultural institutions and other organizations.
The festival also included a debate about (Kurdish Culture) held for Mr. Mazhari Xalqi, Dr. Muhammad Dler, Mar. Mustafa Saied Mina, a photography exhibition about “The Beauty of Culture in Kurdish Lifestyle” and “The History of western Kurdistan in 1875” was also part of the festival, in addition of showing a documentary film.