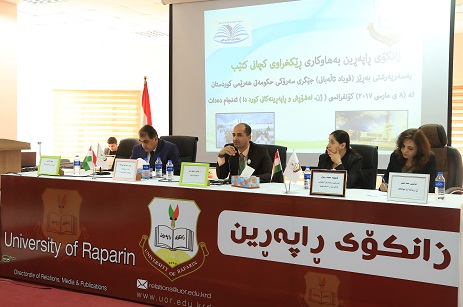 University of Raparin Held the “Women in Kurds Revolution” Conference

On Wednesday, March 8, 2017, under the patronage of his excellency Qubad Talabani, vice prime minster of Kurdistan Regional Government, in the 26 anniversary of Kurds Uprising which was coincident to the women’s day March 8, University of Raparin in cooperation with the Girls Book Group held a conference at the University of Raparin under the title “Women in Kurds Revolution and Uprising”.

The Conference was held in the occasion of the 26 anniversary of Kurds uprising and the women’s day on March 8, the conference started at 9:30 AM, and was arranged in three panels in which 12 topics were presented by researchers on the role played by women in Kurds revolution and uprising.

At the end of the conference the participant researchers and some other public figures were awarded by the University of Raparin’s presidency. The higher committee of the conference declared that in the near future they will publish the conference executives and give it to the affiliated establishments.

Third Topic by: Jihan Xalil, titled in “Women’s efforts in Kurds revolution in the west part of Kurdistan”.
Fourth Topic by: Dr. Rebwar Ismaiel Abdullah titled “The Role of Women in secret organizations”