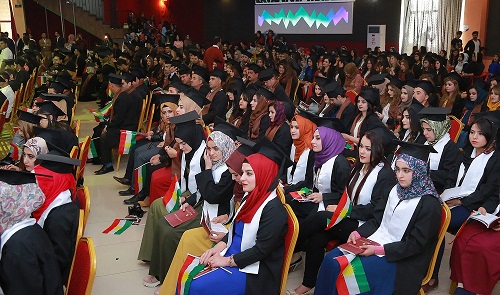 On Tuesday 8/11/2016, under the moto of (with science and knowledge we will build a more developed Kurdistan) the graduation ceremony of the fifth round of the UOR graduates was held in Ranya city, attended by Instructors, governmental officials and graduates families. In the ceremony (766) graduates of (4) Faculties and a college of UOR, were granted bachelor’s degree in different fields of study.

The ceremony started by entering the charioteer of University council, Instructors and graduates. The official ceremony started with reciting of some verses of the Holy Quran, and the audiences stand for a moment of silence for the respect of the martyrs of Kurdistan

The speech of the head of higher committee of the graduation ceremony was given by his Excellency (Dr. Herish Rasul Murad) vice president for the student affairs. In spite of welcoming and congratulating the graduates, the head of the higher committee pointed to the challenge of financial difficulty, bad conditions and obstacles in front of education process in the past few years, with the assistance of all sides and realizing our responsibility we have been able to considerably serve the science and knowledge process and offer this group of graduates to our home land.

Later on his Excellency president of University of Raparin (Dr. Mofaq Khalid Ibrahim) gave a speech in which he gave the audience a warm welcome and congratulated the graduates.
Finally, after taking graduation oath by the graduates, at the request of vice president for student affairs and the deans of the colleges (766) graduates of 2015-2016 in both morning and evening classes were granted bachelors’ degrees in different majors by the president of University of Raparin and the university council.